The City of Dilley woke up to a calm morning on Friday as the Texas coast braces for the impact from Hurricane Harvey. The weather channel offered only this guidance for Dilley on August 25, 2017: “thunderstorms possible at 3:15pm,” and google offered a warning “dangerous winds (55 mph+) from Harvey may arrive near Dilley around Saturday evening.” Google’s map shows Dilley at the very edge of the expected path of the storm and Frio is not currently in the National Weather Service alert area. END_OF_DOCUMENT_TOKEN_TO_BE_REPLACED

END_OF_DOCUMENT_TOKEN_TO_BE_REPLACED

The recount for Dilley Mayoral election was completed at 9:15am on Saturday, May 13th.

At the end of the recount, Ortiz asked, “how long do I have to challenge the election?”

The recount will be held at City Hall on Saturday May 13th at 8am. While the event is not open to the public, residents may be present up to 30 feet from the entrance to the door in which the recount is conducted. 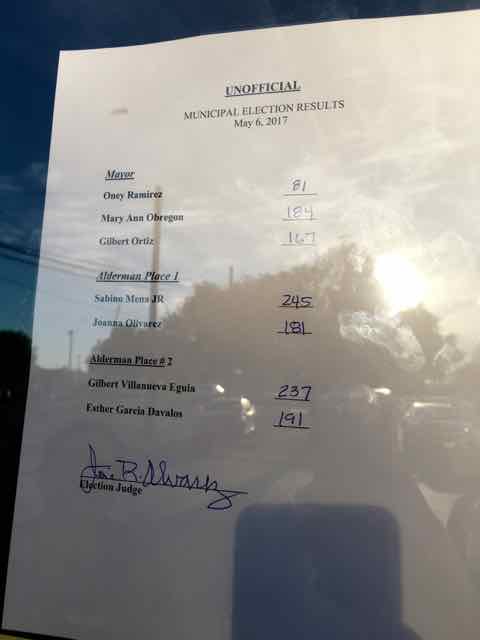 The results for the 2017 Dilley municipal election are in…

In the Mayor’s race, Dilley residents once again chose Mary Ann Obregon to be the city’s chief officer. However, her margin of victory was slim enough (less than 10% of her total votes) to ensure that challenger Gilbert Ortiz will petition for a recount, an action for which his campaign is eligible. The recount is attended by the recount chair and committee members, the candidates and their representatives, the custodian of the voted ballots, the recount supervisor, and any state or federal inspectors.

Each year on Election Day, Dilley city council candidates set up campaign tents along the grassy area across the street from the City Hall. Each candidate uses various strategies to secure the most coveted spot: 100 feet from the polling place, the legal minimum distance and as close as they can be to residents on their way to vote. END_OF_DOCUMENT_TOKEN_TO_BE_REPLACED

A Pearsall resident posted a Facebook comment in an attempted detriment to the city’s management, prompting this statement from FBI and law enforcement: END_OF_DOCUMENT_TOKEN_TO_BE_REPLACED

Recently released documents show that the Texas Commission on Environmental Quality has pursued “enforcement action” as recently as February for unresolved e. coli and suspended solids limit violations that started in 2015. The violations and potential penalties have yet to be mentioned in city council meetings. END_OF_DOCUMENT_TOKEN_TO_BE_REPLACED

City of Dilley water rates are the highest in the region, and many questions surround how the meters are read, and where the revenue goes…
END_OF_DOCUMENT_TOKEN_TO_BE_REPLACED